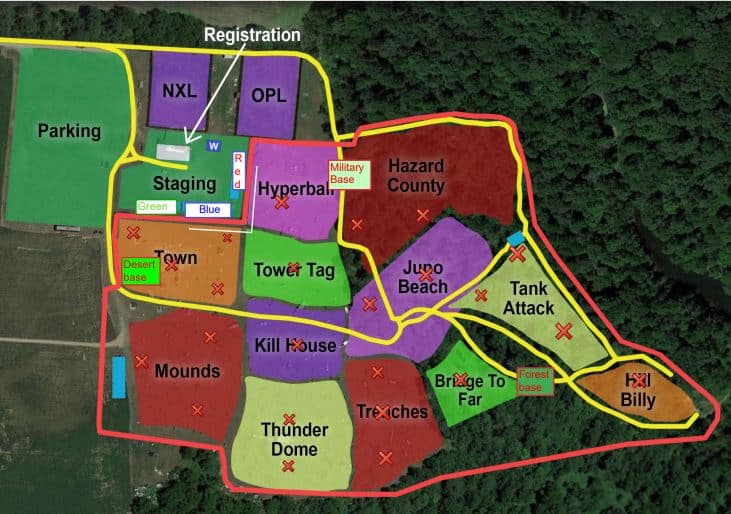 The Object of the game is.  Hold Thunder Dome as long as you can.

-Cool burning smoke only.  (According to field conditions)  Smoke in the bush will be decided on game day.

-No First Strike will be allowed

Round 2, starts after the Lunch break   Green defends

Break at the End of blues defense

Final battle  =  post your flag. This is your chance to make a comeback..

The day will be played in 3 rounds. One round we don’t know when each round will end.

Each team will have objective to complete during the conquest of the castle.

5 points per minute holding the castle.

300 for holding the castle the longest. The castle is lost when the second flag is pulled

50 for pulling the doorway flag

50 for pulling the second flag

5 points for a flag pull

Flags in Tank attack and hillbilly are not in play

5 points for Flags up on the 30 minute mark

Gold bars 5 points (returned to base)

Fuel cans 10 points (returned to base)

-Flags will be counted every 30 minutes.

Players may shoot out of a base

-Players may not shoot into an enemy base,  on purpose; if it happens by chance the hit is not counted. excluding the castle

– Bases will be set up so the opposing teams will not be able to enter.

-Teams can use unlimited rockets from their Base.

-Players may reinsert into the game, only from their team base.

-A half pulled flag indicates Green territory   Note: the red and blue flags should be touching

A flag that has been raised as an embassy flag cannot be pulled.

Any Alliances not approved by The GAME BOSS will cause the two teams participating in the alliance to each loose 4 flag stations immediately, and as many points as the games Boss sees fit.

All sales must be approved by the game Boss.

Airstrikes -must be approved by The Game Boss. The cost 50 points.

-NO full Auto, No ramping, 3 shot burst 10 bps cap is allowed for Blow back markers only

-If you call a Paint check on an opponent and its clean,,  Your Out

-Mercy’s are encouraged and should be accepted